Tips, stories, ideas from other SMEs. 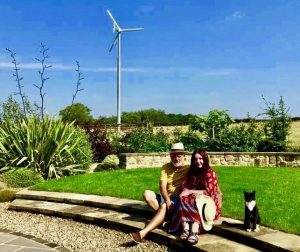 Terry and Tracy Featherstone inherited High Meadows Farm 4 years ago. Since then they have been working on a labour of love to transform their 35 acre plot into a modern family home which is now completely independent of external sources for it’s energy needs. They will never receive another utility bill.

The farm had been owned by Terry’s parents for more than 50 years. Formerly in the 1800’s it was a working coalmine known as the “Jaw Blades Pit” and later between 1936 and 1961 it was the “Coundon Greyhound Stadium”.

The Farm was run down and needed to be completely gutted and renovated. The farmhouse in particular was heated by an old and inefficient oil fuel boiler with no feasibility for connection to the National Gas Grid. The first part of the project was to install a 4KWp (16 panels) PV Solar system on the roof. The solar PV installation was straightforward but there were problems with the inverter, which kept on cutting out. This detrimentally affected the electricity output and at that time, the earnings from the feed-in-tariff (FiT). An investigation into the problem, with the installer at first, and then with EDF and Northern Powergrid found that the voltage into the premises was averaging 263V. It was this high level of feed that resulted in the inverter shutting down. A voltage optimiser was installed to reduce voltage to around 230V and the problem was solved.
A Solar Thermal system with RHI benefits was also installed on the roof to heat the water system.

Concurrently work was underway to refurbish the buildings and to insulate them as efficiently as possible. Drainage improvements and landscaping were also carried out around the farm.

As this was being done the opportunity was taken to install a 10KWp ground-source heat pump to provide under-floor heating throughout the building. The pipework was accommodated 1.5 – 2.0 metres below ground level in one of the adjacent fields and the pump and main pipework incorporated in the cellar.

This was not trouble-free because the first builder employed did not fully understand the groundworks requirements of the installation nor the space required to house it. This led to a number of debates and delays but this heating system now ensures the house is warm all year round.

The next project , in 2015/6 was to install a 12KWp Wind Turbine in a different adjacent field to generate as much electricity as possible to reduce the reliance on the National Grid.

The journey from aspiration to the installation of a wind turbine can be bumpy and this one proved to be just so. Obtaining planning permission from the local authority experienced a number of delays, including an environmental impact study, and a bat survey, and eventually led to the re-positioning of the turbine.

This development also resulted in a long discussion and prolonged procedure with the grid operator, Northern Powergrid, to reinforce the local grid to accept the excess 3 -phase electrical transmission from the turbine that was not used by the farm. It was finally granted but paid for by the Featherstones.

Three other antiquated farm buildings have also been updated and converted to a high standard with green energy facilities installed completely throughout. The middle barn was converted to a kitchen with underfloor heating and solar panelling for Tracy’s Organic Catering facility. The far Barn was converted sympathetically with large windows and amazing views into a bespoke holiday let conversion with Energy “A” Rating awarded due to added upgrades of inset roof solar panelling, ground source heat pump and modern high quality insulation with natural wood beams and design features throughout.

Most recently a new solar agricultural barn was constructed to store farm vehicles and more solar panels were also installed onto this roof during construction. At this stage 56 solar panels of varying power (250, 275 and 300 Kwp sizes) were operating on the farm together with the wind turbine, which meant the Farm was now generating enough electricity to satisfy its demands most of the time. Nevertheless wind and solar energy are intermittent sources of energy. i.e. the wind does not blow all the time, nor will the sun ever shine at night. So, total self -sufficiency was still not accomplished even though the farm is situated 200 metres above sea level and the wind turbine rarely ever stops completely!

Research was carried out into battery storage to maximise the efficient use of the self-generated electricity. Although lithium ion batteries are well established, use in complex and small scale systems is relatively new and the Featherstone’s encountered a lot of conflicting advice and a dearth of technical knowledge about how to configure the batteries with the solar and wind generation and the 3-phase supply.

By early 2019 the couple were sufficiently confident to make another financial investment to the farm with the implementation and configuration of battery storage.

7KW of batteries (5 units) and 3 inverters were installed in the farmhouse cellar to harmonise the output from all modalities and conserve any surplus electricity for use at peak times and maintain the supply to all buildings. Competence to complete this harmonisation was difficult to find and a number of installation businesses failed to find a solution. It took a number of exploratory discussions with a variety of contacts to find someone with the specialist knowledge to integrate the output from the PV and wind turbine across the 3 phase supply efficiently.

The entire exercise has had its difficulties and delays and required significant financial investment but the farm is now completely independent of the national grid, apart from any energy it exports to the grid. It is a warm and modern family home with additional, equally modern and self-sustained business units that should recoup the costs of this project over very few years.

As for Terry and Tracy, they are rightly proud and pleased with what they have achieved. But they are not finished yet…