Coal is dirty. When it is burned it releases CO2, as well as a slew of other noxious chemicals with cause cancer and respiratory diseases. But you already knew that.

For a long time, coal was the primary source of energy for generating electricity for the UK grid (as well as our primary heating fuel too) – we had a lot of the stuff buried just under the ground in our own country and it was cheap.

As a result our grid’s carbon intensity was very high. This means that that our electricity was producing lots of CO2 – measured in kilograms of CO2 for each unit (or ‘kiloWatt-hour) of electricity produced.

In time though, it became more cost effective to purchase from abroad and we stopped producing it in this country for the most part. In addition, the UK also started building nuclear plants, then we discovered natural gas in the North Sea which could be used to produce cleaner* and cheaper electricity (and heating).

*Natural gas was lauded as a “bridge fuel” to sustainability. This is nonsense because natural gas tends to leak out constantly once we have tapped a well, and it’s a much more potent greenhouse gas too. Still, it’s not quite as bad as coal. 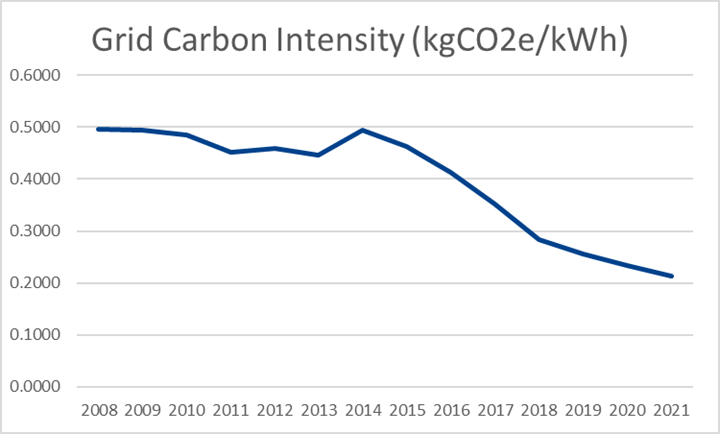 As a final nail in coal’s coffin, we also linked our grid up with other countries such as France, allowing us to purchase cheap electricity when available, and sell to them when we have a surplus.

The picture really began to change rapidly just over a decade ago when wind and solar technologies started to compete with coal (and now gas) on price. Since these sources of electricity don’t produce CO2 emissions the carbon intensity started to decline. This was especially effective since they tended to be replacing coal, the most carbon intensive fuel.

Although coal is (sadly) still playing a part, it’s a small part and shrinking all the time. While we could just shut down all remaining coal plants, they are still required to meet demand in exceptional circumstances – such as the Beast from the East where 10GW of coal was brought online to meet demand!

But what does the future hold?

Wind and solar will continue to be added to our grid. Most roofs are suitable for solar and the government is likely to start loosening the restrictions for onshore wind too. A new 3GW nuclear reactor will soon finish construction in Somerset – Hinkley Point C – which can provide the grid with clean energy. In addition, our country is surrounded by the sea, making tidal and wave energy both viable clean energy options once these technologies mature.

However, the last of the UKs coal power plants will soon be decommissioned for good, as will most of our nuclear power plants by the end of this decade. These power plants will need to be replaced to make sure we have enough electricity and given the intermittent nature of renewables this also means we will need battery storage.

There is much work to be done, but the future of our grid should soon see us using clean, renewable energy to power our homes and businesses. If you are interested in following the UKs decarbonisation progress Gridwatch and Drax Electric Insights are excellent resources for tracking where our electricity is being generated.

If you would like to find out how to reduce your business’ consumption or perhaps install your own renewables, then contact BEEP by email beep@durham.gov.uk  or call 03000 265547 .